Located within Parc de la Villette is this decommissioned submarine where you can go inside to get a feel for how the navy used to operate.

The answer to our Sunday Teaser; Measuring in at just under 50 meters, the Argonaute Submarine served 24 years in the French Navy and was formally a Flagship, now on display to see and experience inside at Parc de la Villette.

Although some close guesses, sadly no close-enough ones this week, but better luck next Sunday!

Originally a flag ship for the French Navy you can now walk through the decommissioned submarine.

This was the answer to the Sunday Teaser, sadly no one guessed it, better luck next week!

Here you can see a close up on one side of the torpedo tubes on the Argonaute Submarine, allowing people to learn and experience more about naval history while in Paris. 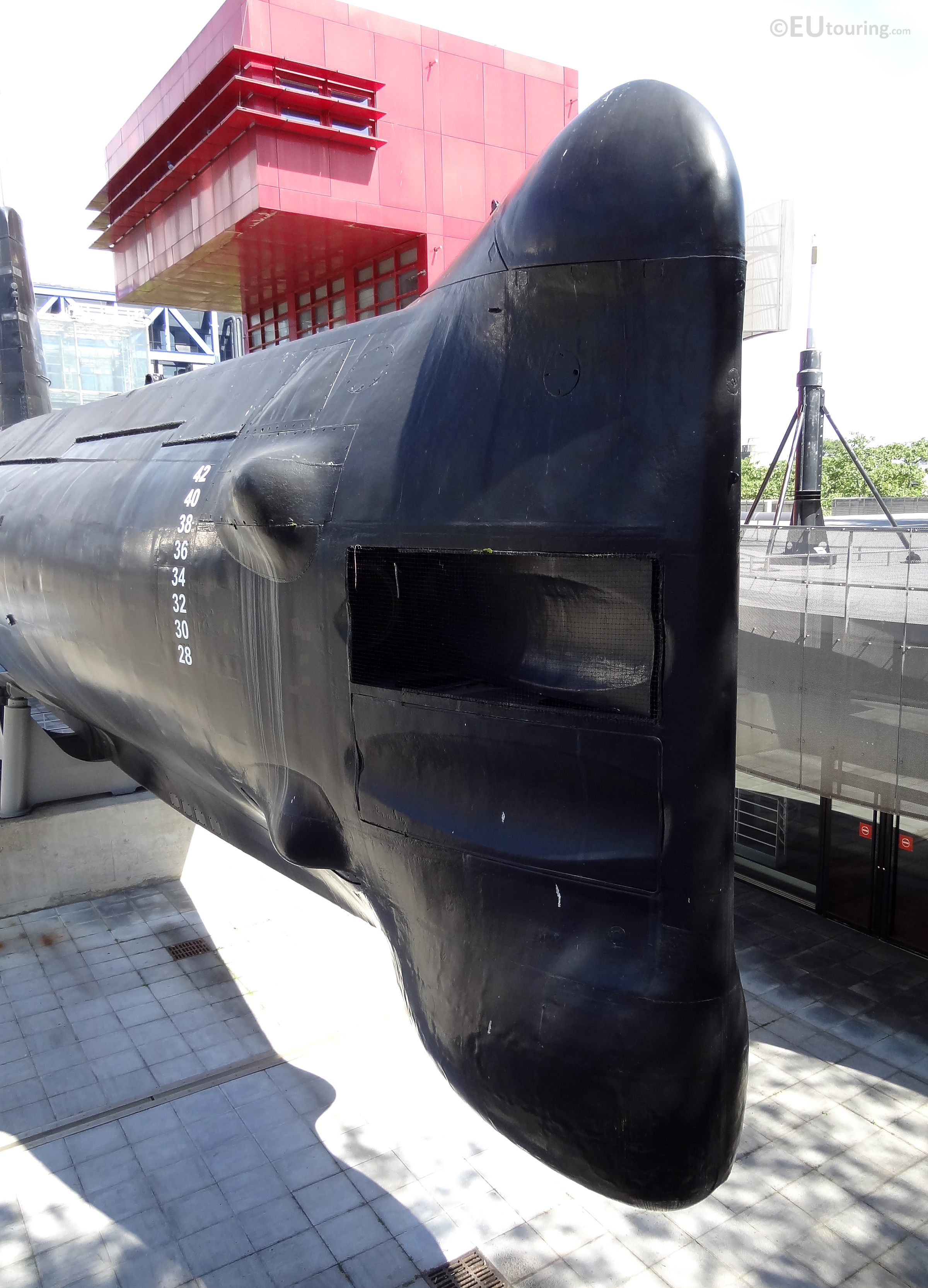 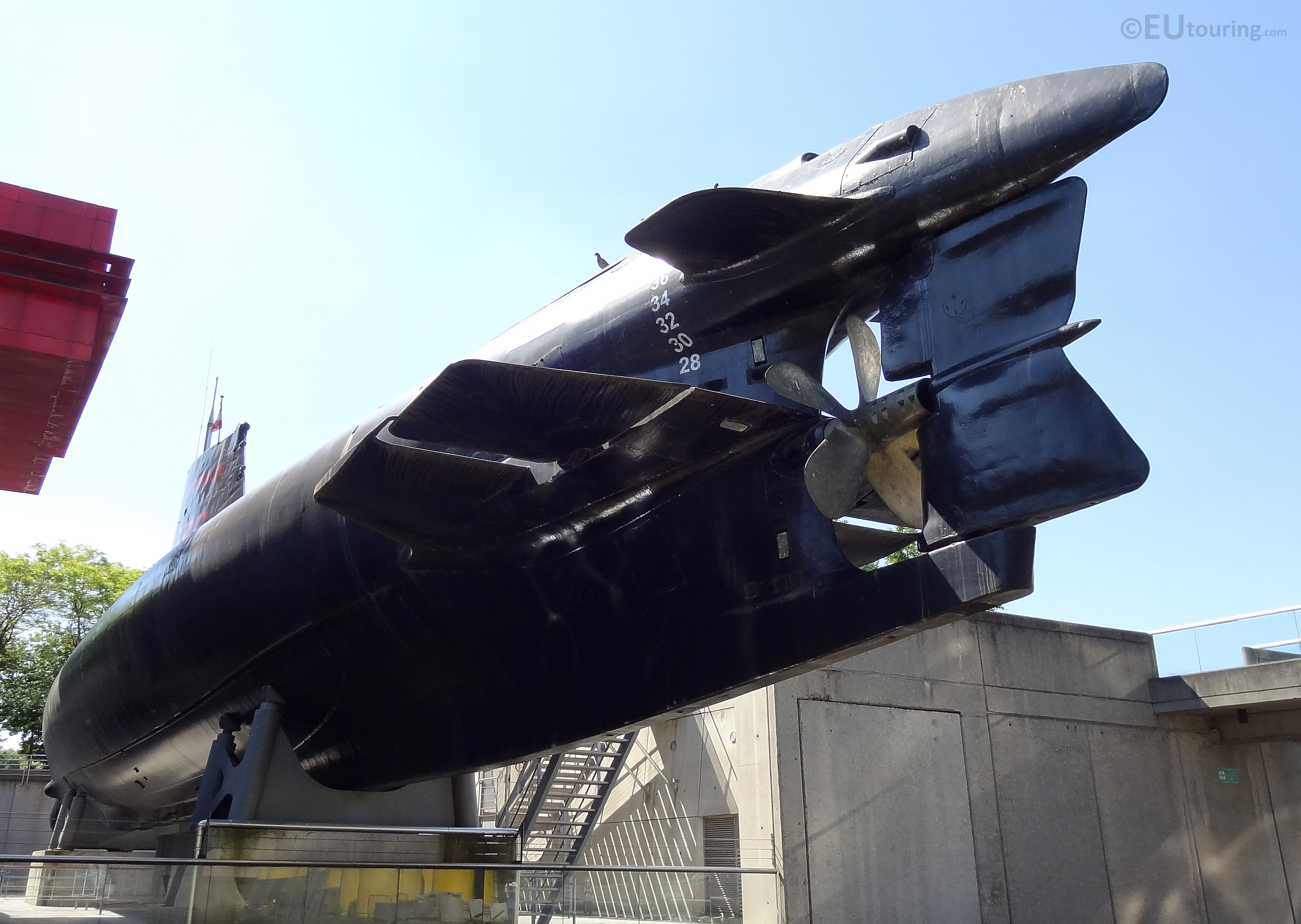 This photo shows the Periscope that was used on the Argonaute submarine and was even in use up to the 1950’s, which is now on display next to the submarine. 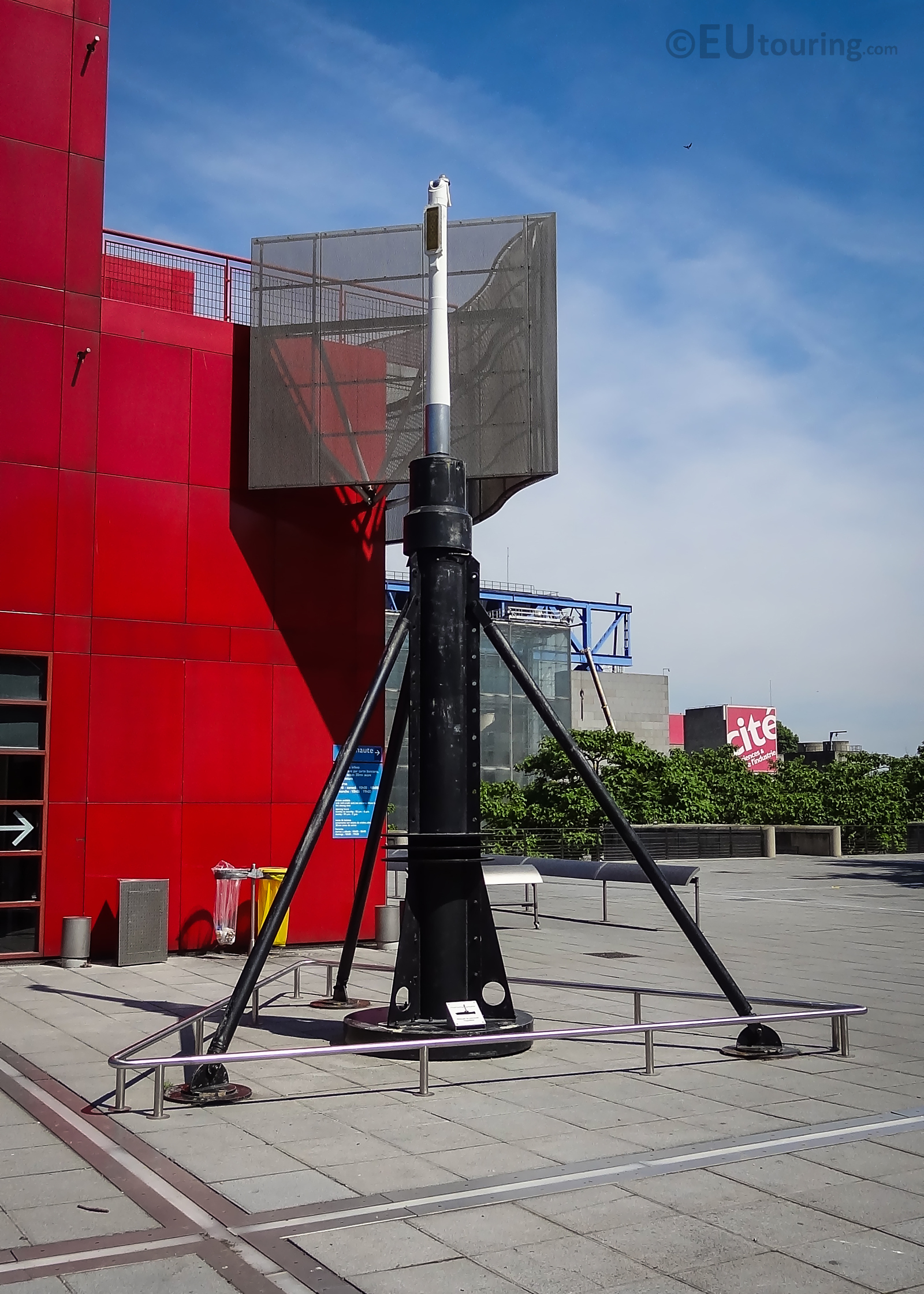 Here you can see the front of Argonaute Submarine which is found near to the Cite des Sciences museum, giving more of an idea of just how large the vessel is.

More information and details at http://www.eutouring.com/images_argonaute_submarine.html 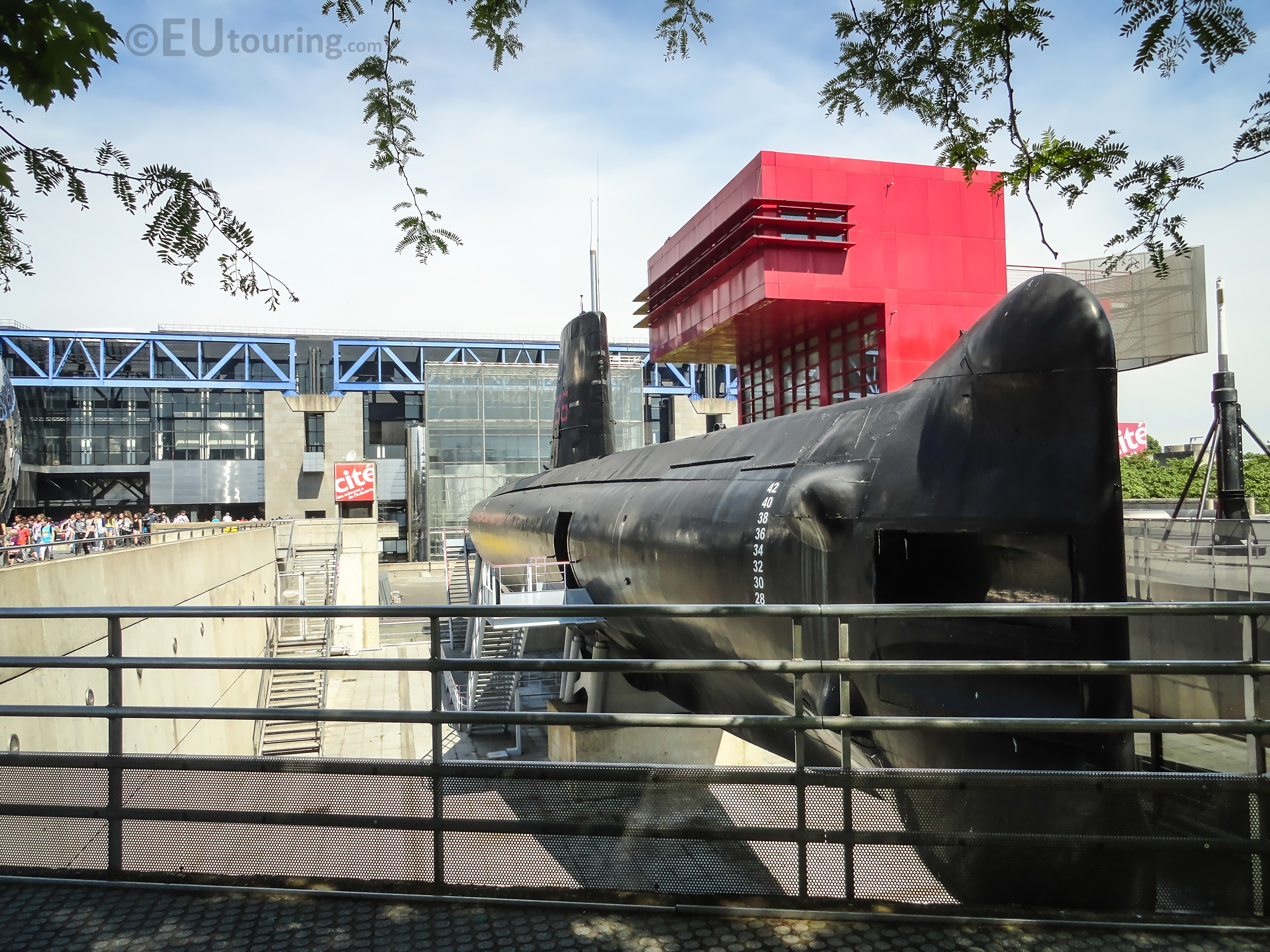 In this photo you can see the front of the Argonaute Submarine which was used by the French Navy, as well as The Geode cinema which can be seen in the background of the photo. 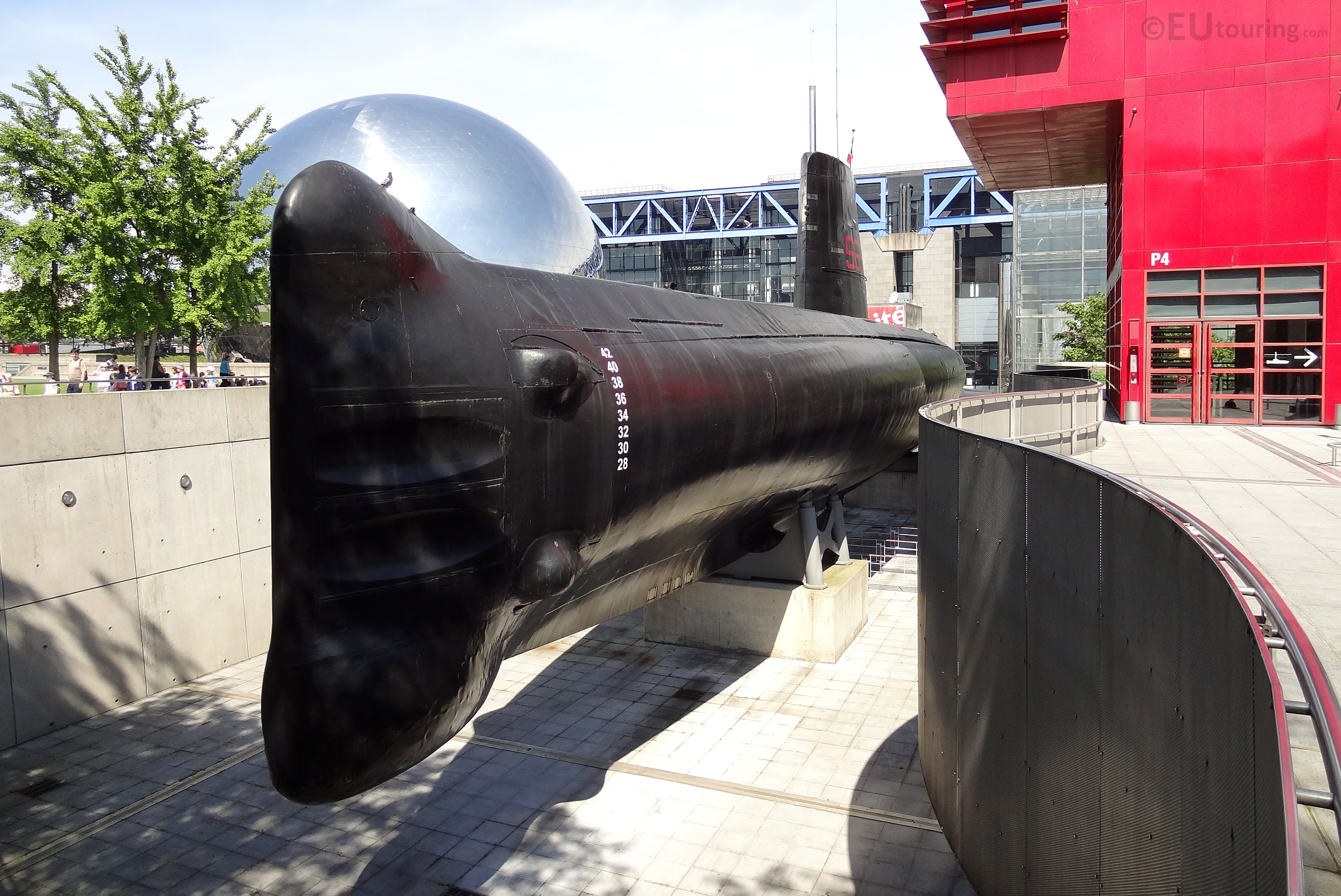 Here you can see the back end of the Argonaute Submarine as well as the steps that lead up to the entrance for visitors to explore inside.

More photos to be seen at http://www.eutouring.com/images_paris.html 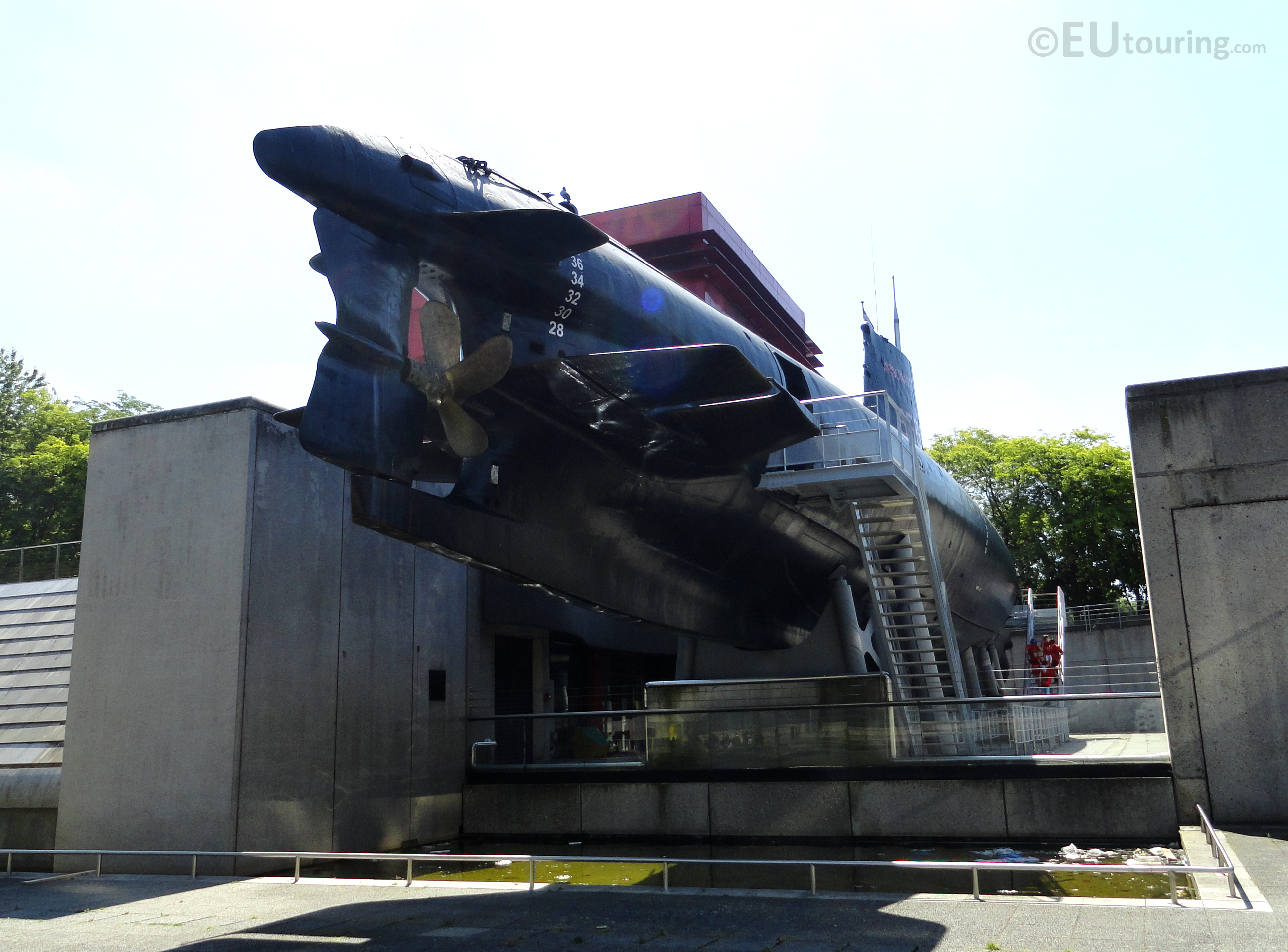 The Cite des Sciences is an all round popular museum, being the largest science museum in all of Europe and the fifth most visited museum in Paris, joining other popular museums such as The Louvre, it makes it an amazing museum to visit which is suitable for all ages and types of interests.

There are some permanent exhibitions at the museum which allow you to be interactive with the museum such as within the Techno Gallery, where you can play the latest games, test prototypes, discover robots and much more.

Another exciting area is the Images exhibition, where you can include yourself within a TV advert, manipulate pictures and more. Other exhibitions include the light exhibition, outer space, satellite, along with enabling you to be able to discover optical illusions, test new sound devices and much more to stay entertained.

Yet even young children are also catered for with a designated area just for them with interactive displays and organised activities available daily, yet teenagers will also be in their element and come away from this museum after having fun and learning or discovering new things to fuel their imagination.

But forgetting the Cite de Sciences et de l’Industrustrie for a minute, you cannot forget the Argonaute submarine, which is just outside, and being a real submarine that served within the French Navy until it was decommissioned, it eventually became an unusual tourist attraction in Paris to visit. This allows many people to visit the submarine yearly and get to see how the marines used to live and work by venturing into the crew stations, torpedo launching area, the radar detectors and much more.

At first glance the attraction may be seen as more of an intriguing structure rather than a cinema, with its perfectly smooth and circular shape it can act just like a mirror. But it is not to be underestimated at the equivalent of 12 storeys the building can easily tower over you, and the structure in itself is a technological feat with 1,580 bars of steel tubes comprising together to make the structure, and the whole Geode can weigh in at around 5000 tonnes.

For Omnimax films the experience is like no other with the whole screen being able to be occupied by a film it can reach 10 times that of a normal cinema, yet when digital images are shown they can also be up to 25 metres wide which is far beyond the field of vision for the viewer, making you feel like you are part of an image instead of just watching it.

The geode is a fantastic way to end a day, or start it! But with anything you can get peckish, or want a meal while you are out, which the Cite des Sciences wishes to accommodate easily with many different choices available to suite all tastes and budgets.

The first restaurant, Le Hublot Restaurant serves traditional French cuisine at your table and offers a wide choice of dishes to have, and even including that of a three course meal, which is located at the second level of this incredible museum in Paris.

The Cafe de la Cite is an internet cafe in Paris with an option to have both take away and eat-in with various internet points and microwaves available.

Aux Pains Perdus Sandwich Bar, as it says in the name is a sandwich bar which serves both hot and cold food, also located on the second level allowing you to enjoy many sandwiches, snacks, desserts which again you can eat there or take away.

The Bar du Forum and the separate Bar des Lumieres are perfect for a quick coffee stop or to grab an ice cream for children, allowing you to have a short break if you are on either the first, or second floor without a problem.

Among other things there are the little extras you can find at the museum to use to your advantage to help make your time spent at the Cite des Sciences even easier.

Firstly there is a cloakroom where you can leave coats, bags and more which are available for individual visitors and groups completely free when you show your ticket to the museum. Additionally there are also wheelchairs and push chairs which can be borrowed.

For shows within the Planetarium which is all about space there are free audio guides for the sight impaired individuals available in French, English, German, Spanish or Italian. And in the main hall there is also a scale model of the cite de sciences designed for the visually impaired which talks when you touch it to help those understand where they are more so.

Lastly, but not least there is a gift and book store located in the main hall where you can purchase many various items including that of games, souvenirs, magazines, catalogues, science experiments and much more suitable for all people of all ages.

So as you can tell, a visit to the Cite des Sciences along with the Geode and the Argonaute submarine, which are all located at the Parc de la Villette, can make a fun packed day out while you are on holiday in Paris. Not forgetting that there are also other tourist attractions here as well, such as music venues and the Cite de la Musique with its concert halls and museum.