This stone statue is of Jean-Jacques Rousseau, a replacement of the original bronze which stood here beside The Pantheon that can be seen in the background. 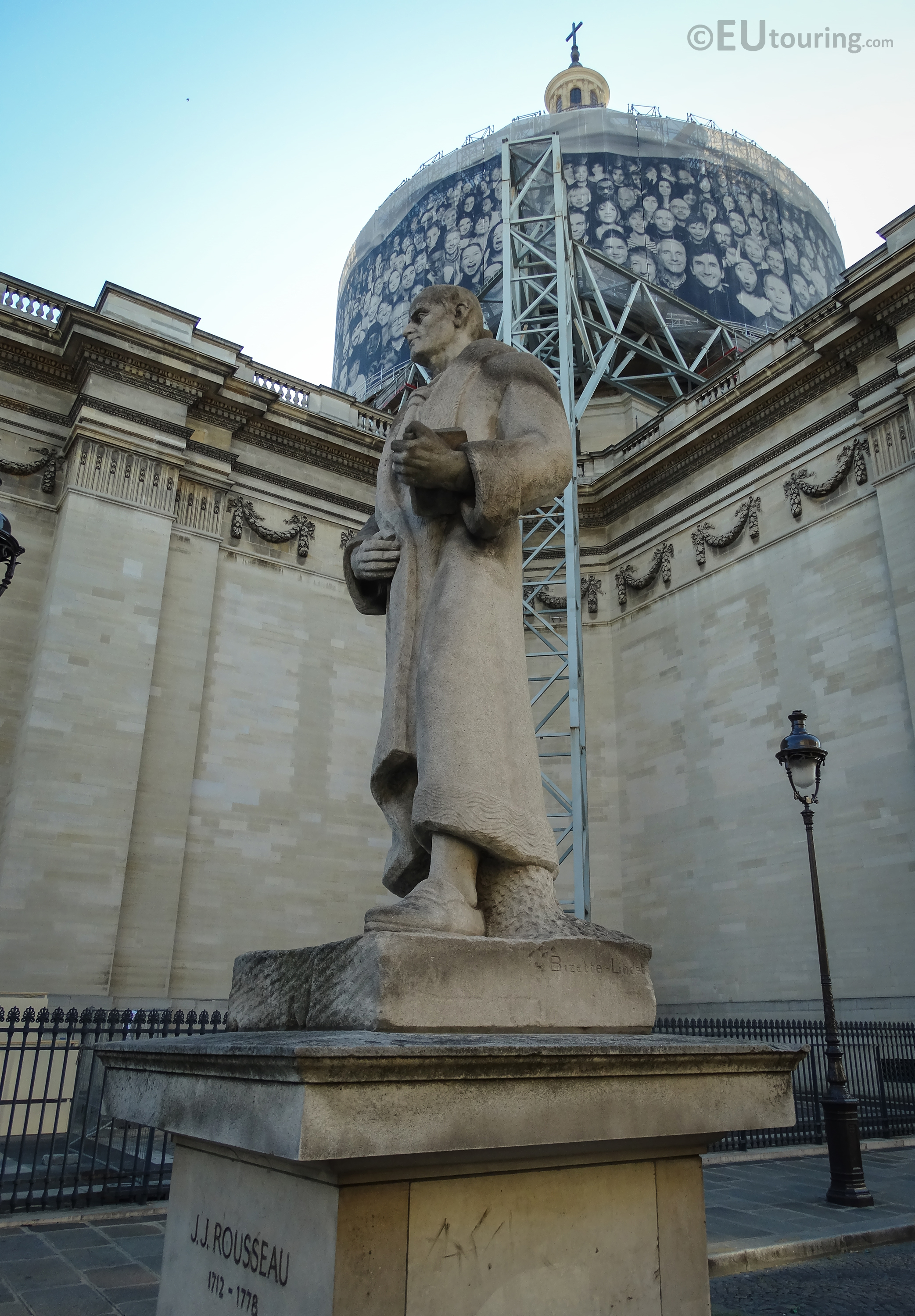 Back in 507AD King Clovis converted to Christianity and decided to build a basilica on the very site where The Pantheon stands today and Saint Genevieve, who was the patron saint of Paris that protected the city from the barbarians, was buried in this basilica in 512AD.

So, in 1755 the design for the new basilica was entrusted to Jacques-Germain Soufflot, the chief architect of King Louis, and the overall design was that of a Greek cross with a very impressive portico of Corinthian columns, but the then Basilica has a combination of different styles like Greek architecture and also a Gothic system that utilised flying buttresses and arches to make it as light as possible.

However, even though the first foundations were laid in 1758, unfortunately, due to financial difficulties, Jacques Soufflot died before this impressive basilica was completed and eventually it was completed at the start of the French Revolution.

In fact, Rousseau, who was known as the father of equality, is laid to rest opposite his sworn enemy, Voltaire, but these two men were both named as emblems of the Enlightenment, which was a term used for philosophers who favoured reason and science, but when political ideals changed, the ashes of Marat were removed and it became a place for Christian worship again.

However, it was turned back into The Pantheon during the reign of Napoleon Bonaparte I, and in 1851, the physicist Leon Foucault demonstrated the rotation of the Earth by his experiment conducted in the Pantheon, by constructing a 67 metre Foucault pendulum beneath the central dome, yet there is only a copy of the original pendulum in place today.

Great people were interred within The Pantheon in spectacular ceremonies, such asVictor Hugowho wrote the Hunchback of Notre Dame, who was interred here in 1885 and many others followed such as French presidents, Louis Braille founder of Braille, the scientists Pierre Curie and Marie Curie who was actually the first woman to be buried in the crypt.  In addition to the ashes of the French Resistance fighter Jean Moulin and the heart of Leon Gambetta in an urn plus many others, but the most recent was that of Alexandre Dumas who wrote the Three Musketeers.

As you can no doubt tell, there is a vast amount to see at The Pantheon and the first thing is the masterpiece of architecture from the outside and by entering this monument you see the main floor including sculptures at the base of pillars that depict the French Revolution, then continuing in, you can get to see the copy of the Foucault’s pendulum.

You can also get to see the maroufles, which are paintings on canvas that are glued in place, and these are located where the original windows were bricked up during the French Revolution.

And as you towards the back of The Pantheon past the Foucault pendulum, you will see the staircase down to the crypt, which has a permanent exhibition that provides details of the work and lives of those that are buried here like Victor Schoelcher, Emile Zola, Jean Lannes, Marechal de France and many others.

Plus you can have a guided tour of the dome and the external colonnade that provides fabulous views of the city, which is yet another monument in Paris that is an ideal spot for taking in the sights while you are on holiday in Paris.

Yet we would like to point out that the dome can only be accessed from April through to October, even though this famous monument in Paris can be visited all year round.

Now there is a charge to enter The Pantheon, but it is free to those aged under 18 who are accompanied by an adult, and a guide booklet is also available in different languages such as English, German, Italian and Spanish, but if booked well in advance you can also have a guided tour, which again can be arranged in different languages such as English.