A view looking to the Théâtre de la Ville in Paris, with the Tour Saint-Jacques in the background.

This photo shows the Theatre Marigny found within the Jardins des Champs Elysees, showing the unusual shape of this historical venue.

More information and details at http://www.eutouring.com/images_jardins_des_champs_elysees.html 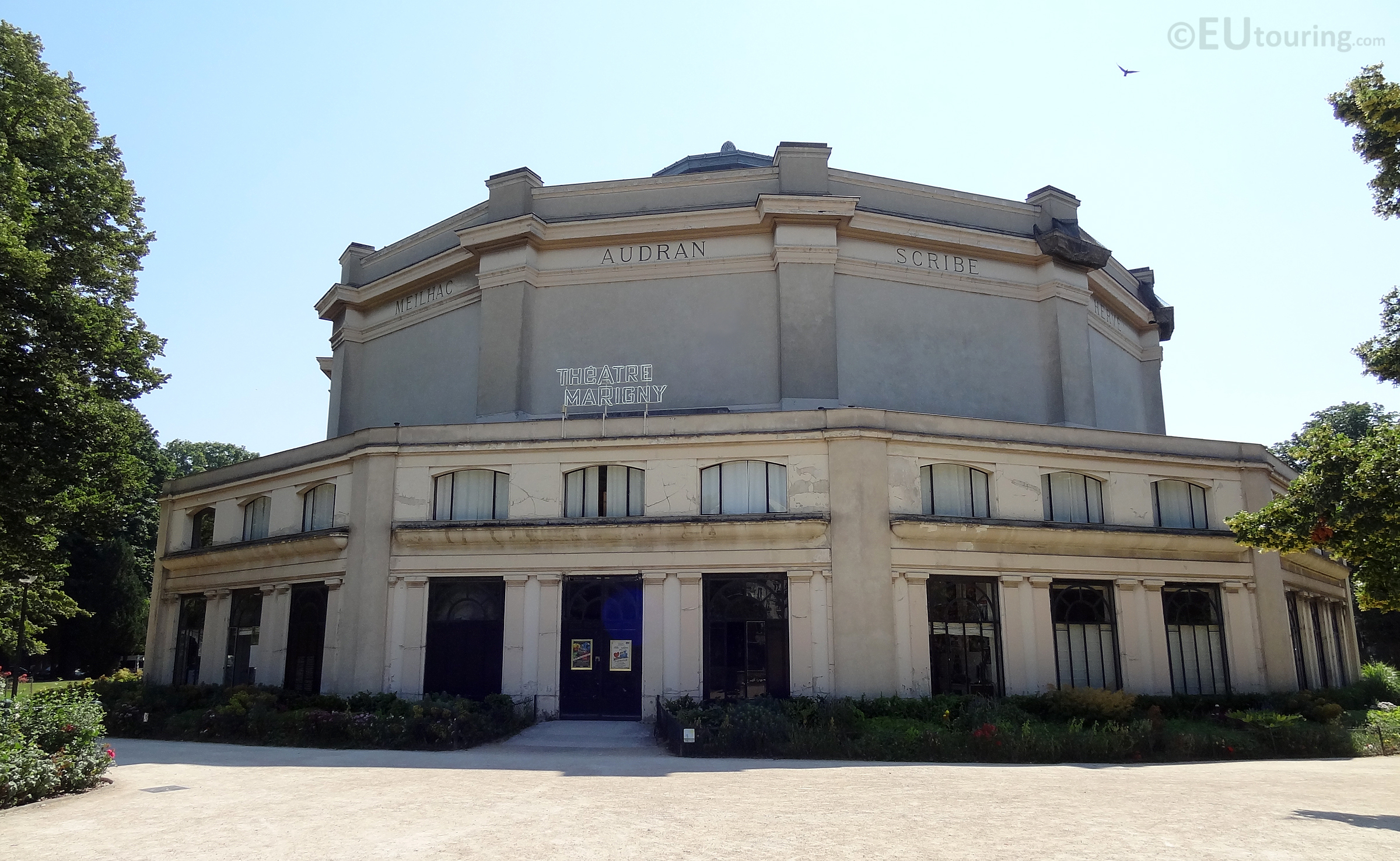 The Theatre Marigny which can be found within the Jardin des Champs Elysees has been there since 1885 and is available for anyone to enjoy the shows and concerts which are held inside. 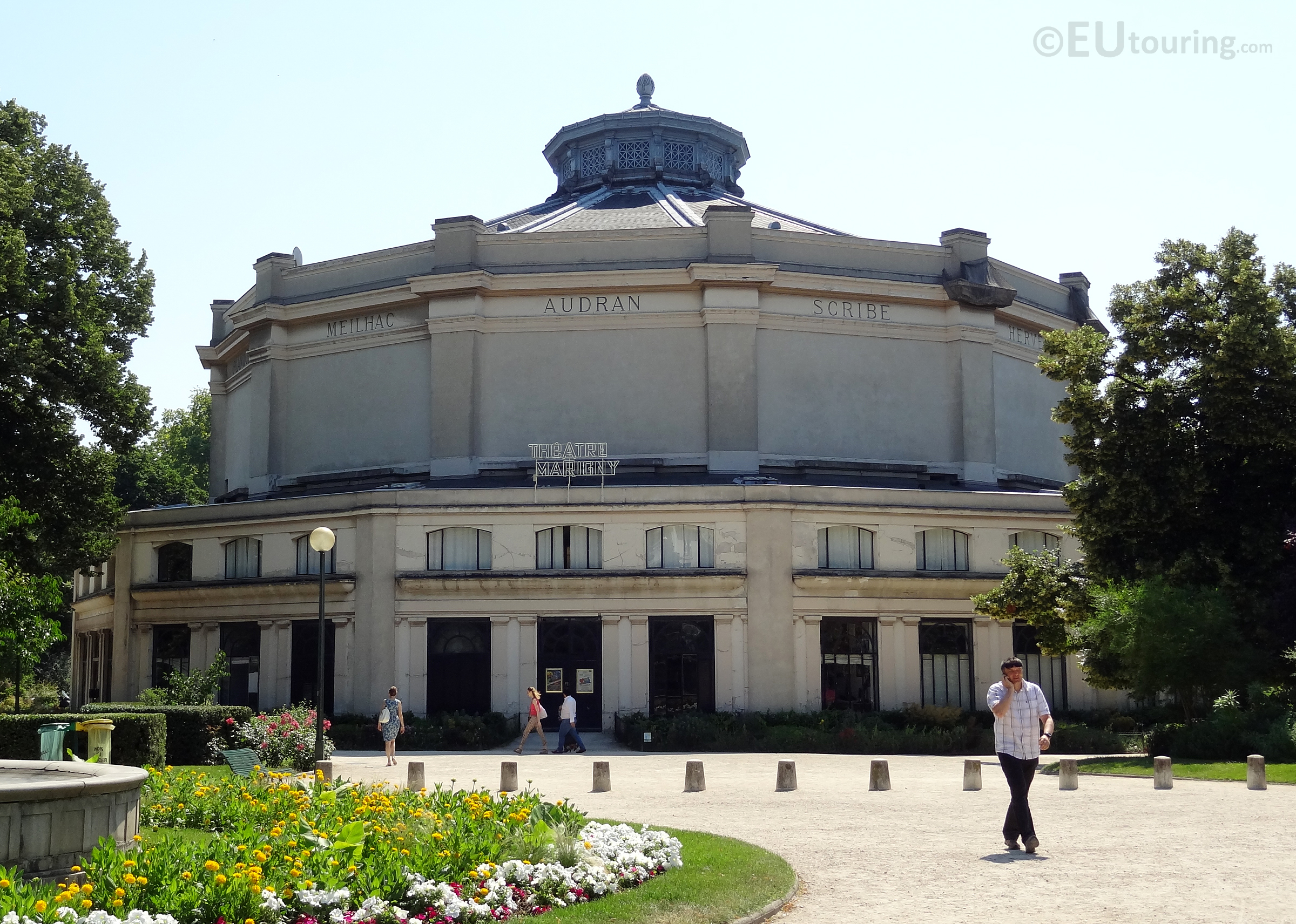 Here you can see a shot of a fountain within the Champ Elysees Gardens that we took, surrounded by a small garden and paths with the Theatre Marigny to the right behind it.

More photos to be seen at http://www.eutouring.com/images_jardins_des_champs_elysees.html 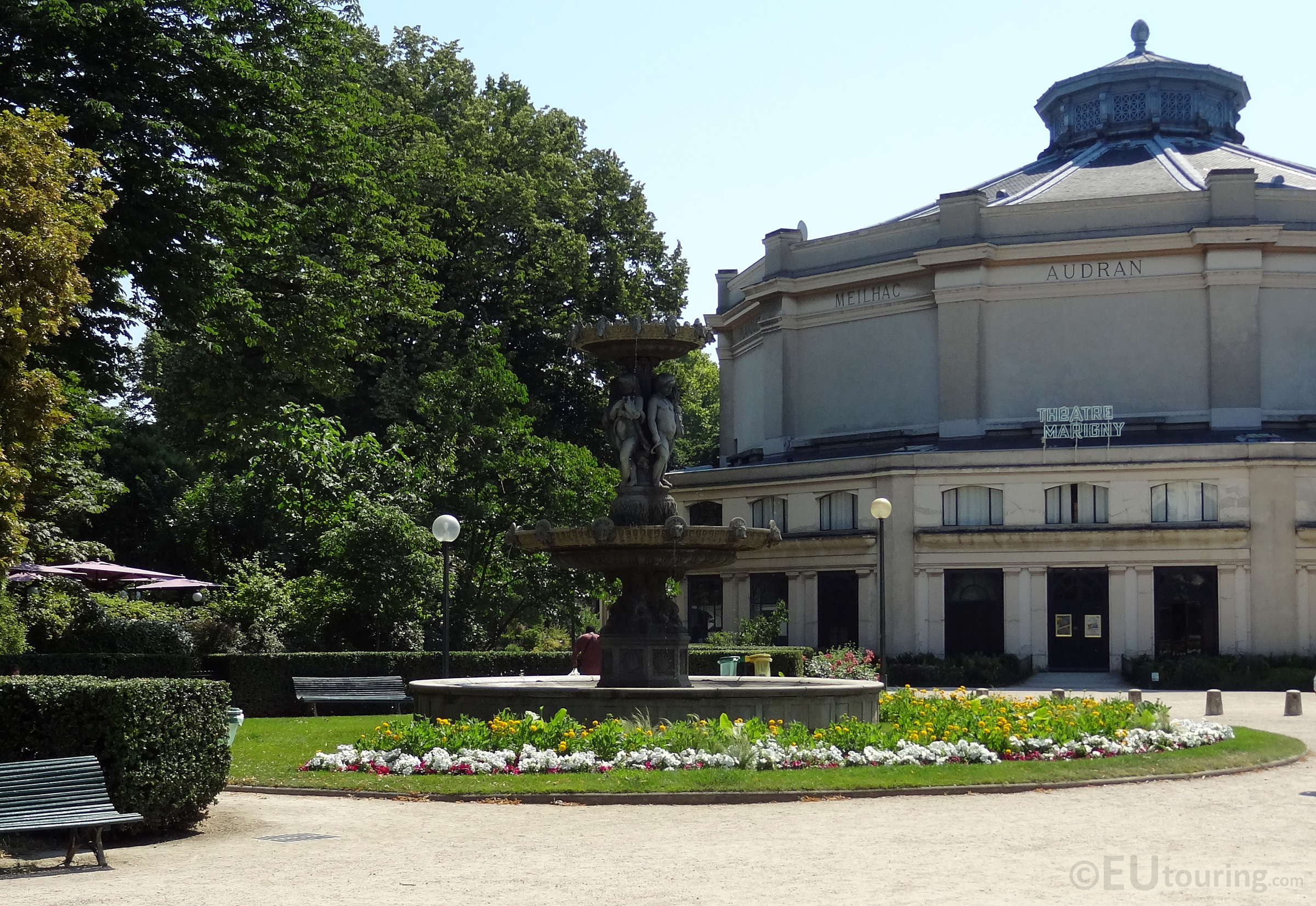 In this photo you can see Theatre Marigny which is found within the Champs Elysees Gardens, as well as one of the four intricate fountains which are located within the gardens.

More information and details at http://www.eutouring.com

The Theatre Marigny is a theatre which can be found in the Champs Elysees Gardens as can be seen here in this photo, surrounded by trees during a bright day.

The Palais Garnier, also known as the Opera Garnier is the 13th theatre to house the Paris Opera since it was founded in the late 1660’s by King Louis XIV, and this particular opera house was built by the orders of Napoleon III to be part of the great Parisian reconstruction project, the building being named after the architect Charles Garnier.

The Palais Garnier was inaugurated in 1875 on 5th January after taking a full 15 years to complete. Today now it is known by various different names from the Opera National de Paris, the Palais Garnier and finally, Opera Garnier. Nowadays the main focus is ballet performances as other operas are performed in the newer Paris Opera House of the Opera Bastille.

The Opera Garnier was renovated in 2000, making the main facade impressive to look at just as if it was from the 19th century again with its many rich colours and golden statue work.

Yet one of the most well known features of this tourist attraction has to be the Grand Staircase, that was made in various colours of marble and features two bronze statues at the bottom, and if you look up you can see four differing sections of the beautiful painted ceiling.

The staircase is an impressive 30 metres and leads to different areas such as the different levels of the auditorium, the foyers and to the Rotonde de l’Empereur which has a library within and the Musee de l’Opera museum. But because the Palais Garnier was never finished before the Empire fell and Napoleon died you can still find the Rotonde de l’Empereur was never completed and you can see the dressed blocks of stone which are original from the 1870’s!

In addition you also have the large and amazingly decorated foyers which give the audience areas to walk in during performance breaks and the vault of the Avant foyer is incredibly covered with numerous mosaics on a gold background to bring out the vivid colours, not forgetting the view of the Grand Staircase either.

Charles Garnier aimed for the Grand Foyer to look like the gallery of a typical classic chateau, which makes this impressive tourist attractions in Paris feature a large grand foyer size of 18 meters high, 54 meters long and 13 meters wide. As well as being fully restored in 2004 with its windows and mirrors and amazing ceiling paints done by the artist Paul Jacques-Aime Baudry, it creates a very unique and impressive atmosphere.

Also there is a sculpture made by Carpeaux of Charles Garnier’s bust that stands in the centre of the foyer towards one of the windows which faces the Avenue de l’Opéra and the incredible Musee du Louvre museum.

One room, The Salon du Glacier, has a very 1900s feel to it with a remarkable ceiling painting made by Georges Jules-Victor Clairin and tapestries showing different drinks such as tea, coffee through to hunting and fishing.

The theatre itself, or auditorium if you prefer, is vastly decorated with reds and golds in a typical Italian-style horse shoe shape. Featuring over 1,900 red velvet seats and lit by an incredible chandelier which weighs in at 8 tonnes!

The stage is an amazing size, with a total of 60 meters high, which includes 15 meters under-stage area as well as a 45 meter fly tower!

Since 2011 there has also been a restaurant here, named L’Opera, which was constructed behind glass and between columns to not damage any of the original architecture of the Opera Garnier.

The Opera Garnier is obvious still a functioning and running theatre, allowing you to book tickets for shows aimed more at children on their website but you can also find that some of the tours in Paris offer package deals to this opera house in Paris.

Although if you are not so interested in seeing a performance you can always take a tour around the opera house. On normal days you can visit from 10am through to 5pm, allowing you to take a look at some of the amazing architecture from the Grand Staircase, auditorium, elegant ceiling paints, Grand Foyer and much more.

But you can also see the Opera Museum known as the Bibliotheque-Musee de L’Opera National de Paris where you can find all kinds of history of this opera in Paris as well as old costumes, stage sets and much more. The cost of a ticket to visit is €9 or for under 25s €6 and is free to those under the age of 10.

There is also a chance of taking a guided tour around the Opera theatre in either French or English which lasts around 90 minutes, giving you a visit for the theatre and the history of the Palais Garnier, the architecture and more.

Although you can also gain access to Musee Gustave Moreau and the Musee d’Orsay at a reduced rate if you keep your ticket on hand and present this at the ticket sales counter, for one of these other two very interesting museums in Paris.

This makes the Palais Garnier a very interesting and fascinating Opera house and theatre to visit while on holiday in Paris, whether you want to simply admire the building, paintings and elegance or watch a performance, it can all be done with ease.